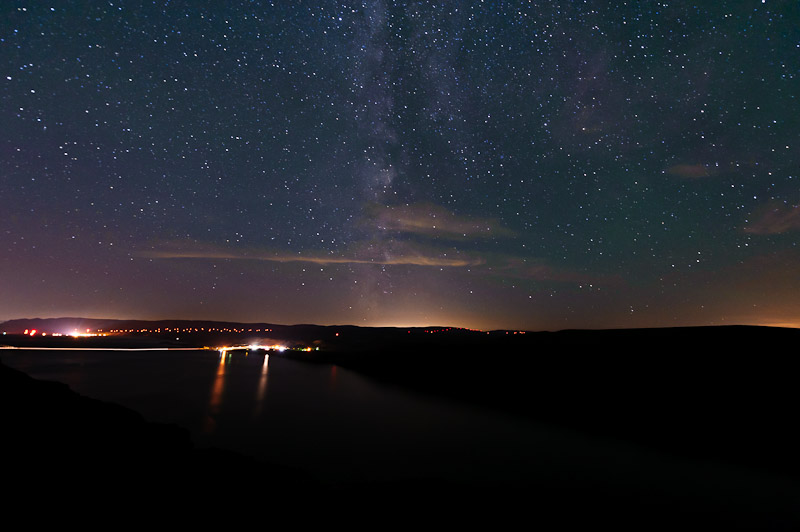 Sometimes in life your best laid plans can go to waste, and so you have a choice of lemons or lemonade.  Several years ago, I visited the Wild Horse Wind Farm in central Washington and fell in love with the place. It is a great location just west of the Columbia River off Interstate 90 back off the old Vantage highway. On that last trip, my friend Mike and I filled out all the paper work to stay out of Guantanamo and learned that you can stay out on the farm after dark. On this trip, we assumed we would be able to stay and shoot the wind farm once the stars came out. Well, I things have changed; and we weren’t able to get permission to stay much past dusk on this trip (a lemon level event). So on really short notice, we had to come up with an alternative location to shoot from for our night sky imagery (a lemonade stand was born).

We loaded up the car and drove along the river looking for some good locations from which to shoot the night sky. We finally decided on one of two locations. We were torn between the Wild Horses Monument overlook going eastbound and the same overlook facing westbound. Ultimately, we decided on the westbound overlook for a number of reasons. You could see the Interstate from several locations, the actually camera setup distance from the Intrastate was greater reducing stay light from cars, the visibility of the area wind farms and finally the location of the moon and stars (thanks to my Google Sky app). 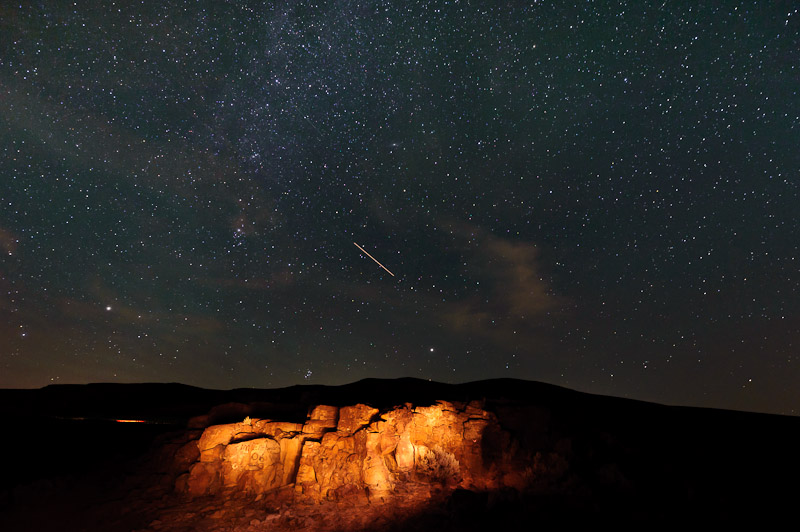 After arriving, I sort of bounced around from a lot of locations and trying to figure out what would work best for me since I really had no idea where to start. I found several locations that had a pretty good overview of just the river, but there were these pretty cool rocks in and around the overlook. So I decided that I wanted to add them into several of my shots. It was so dark, I knew that my only real option was to light paint the rocks into the image. Even though the moon was pretty full and bright, the light wasn’t enough to really pop the rocks against the sky.

All I had with me for light was my little LED flashlight and it cast a very blue light. As a result the initial images looked a little um harsh and basically sucked a lot. In order to save space on this trip, I didn’t bring a lot of lighting gear, but I was fortunate that when I dug into the bottom of my bag I found a 1/4 CTO that I was able to tape onto the front of the flashlight. This did the trick and I was able to really warm up the the rocks. One of reasons I wanted to rocks to be so warm was that I liked the contrast between the blue/night sky and the orange/yellow rocks. The complementary nature of the colors really appealed to me.

It took a few exposures to get the painting strokes down to a level where I felt like I was getting close to what I imagined. However,  I am looking forward to returning to this location or similar location to further work on this craft. It is not as easy as it might look. It is very easy to over paint one area and under paint another. Luckily in order to get the stars to appear as star points and not streaks you need a relatively short exposure (10-30secs in my case) so the amount of time to shoot again and again wasn’t that painful as I refined my bush strokes.

There were some new lessons to be learned much like on the night before. First, it is important to leave something reflective by the camera because you might not be able to see it when you get back from the objects you are painting. It could be very expensive to kick the tripod over in the dark. Second, you don’t need a lot of light to paint with. There is so little light in the environment that any amount of light really show up in the image. Third, you need to put a snoot (I used gaffers tape) so that you don’t spill the edge of the flashlight into the image. Those bright streaks really stand out in the dark.

Ultimately, I found that I really enjoyed being out and shooting images like these. There is a solitude from being out so late a night that is energizing. It is also humbling to be under such a vast sky and landscape. I could help but feel in awe of the amazing universe in which we live.

← Prev: Not all stories are done Next: Why I spent the day with Zack Arias →