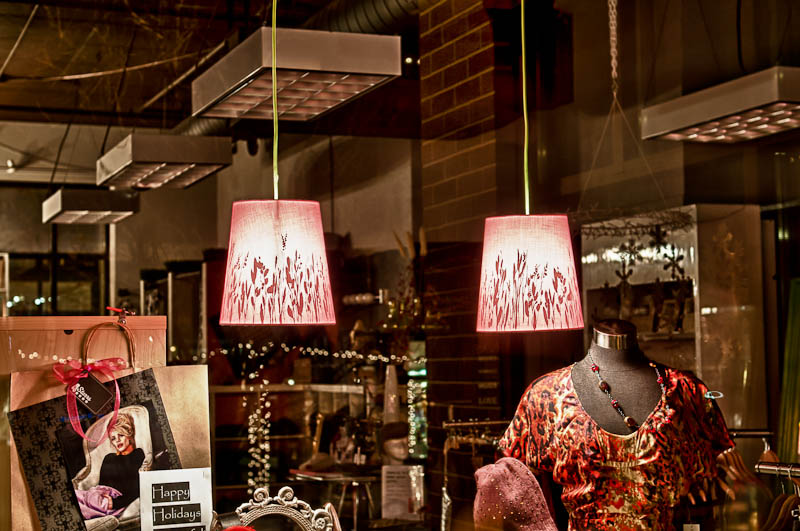 On a recent trip to Bellingham Wa, I was out shooting in Fairhaven during the early evening. On this particular night, it was pretty windy and rainy so I took to shooting a lot of storefronts seeking protection under the awnings.

I have been shooting storefronts for a number of years now using Kodak VC 160 film. The latitude of the color negative film is so much greater than than the current generation of digital sensors, and I found I wasn’t really happy with the levels of details I was capturing with my current camera in a single exposure. After a few nights in frustration, I finally started to attempt to process realistic looking HDR night images. This particular image was processed with Nik HDR Efex Pro. I think that this process has done a really good job of giving me back my film latitude and with much more control than I has while shooting film.

I like this image and think that it works on several levels. I like the warm tones of the red dress and lamps that counters to cooler metal frames, metal store overhead lights and the window reflections. I also like that the image has a silver mannequin head on the table behind the mannequin body in the red dress. I think this adds a sense of twisted irony. I also like the challenge of figuring out what is in the store verse reflections in the window.

Image captured on a Nikon D300s with a 24-70mm f/2.8 on Lexar UDMA cards. The final image is processed with Nik’s HDR Efex Pro.

← Prev: Dr Who and a crack in time Next: Review of Think Tank Photo Retrospective 30 →